skip to main | skip to sidebar

Holy long time no post!!
I normally would blog during nap time or after Kylar was in bed. But instead of doing that, I would read blogs in reader. Or skip blogs in reader is more like it! So I decided to unsubscribe to almost all of the blogs!! No offense to anyone, but it was sucking up all my "computer time". And to be honest, it was a little ridiculous to have 1000+ unread blog posts! So, I simplified it! When I logged in during nap time, I had 23 unread blog posts! So much easier!!
So, here's to having a fresh start with blogging!
Wish me luck!
Posted by Mallorey at 6/01/2011 08:08:00 PM No comments: Links to this post

Attack of the crazy birds!!

Kylar and I left the house today fighting hundreds of birds! And our only weapon was the mighty umbrella!!
Nasty birds!! 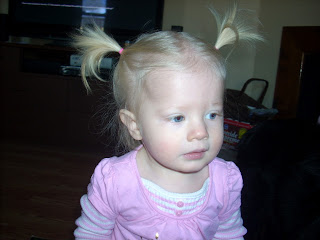 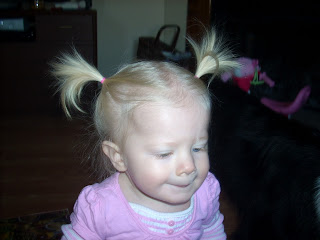 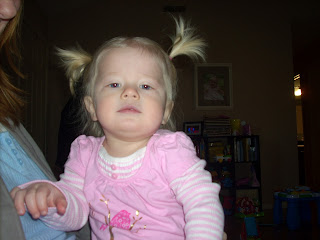 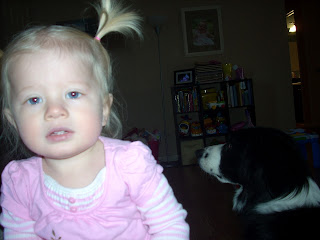 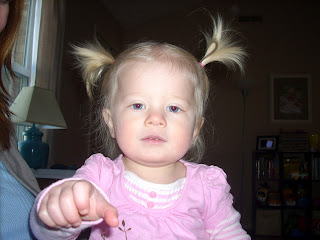 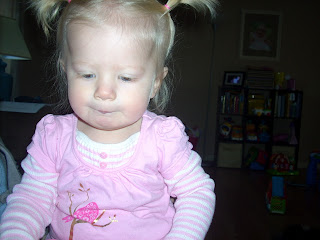 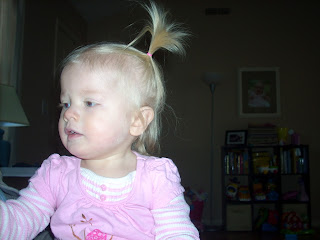 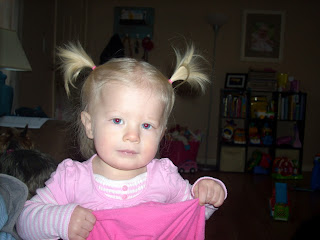 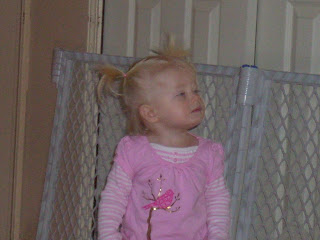 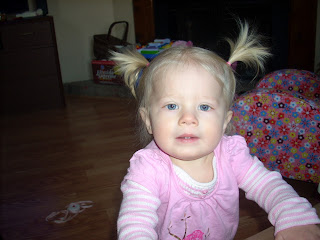 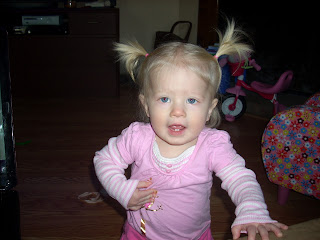 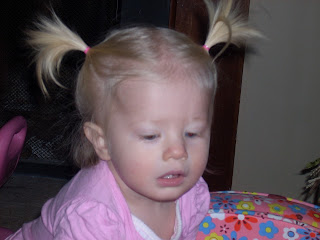 First of, I have been a super slacker when it comes to blogging!!! I will TRY and get better at this! Try is the key word!


Here is what is new with the little girl!!
Kylar got a new pediatrician. We were just not happy with her original doctor. He was very concerned about her size and was trying to get me to wean her before she was even a year. So that was the icing on top of the cake. We decided to switch to a pediatrician that shares more of our beliefs. Such as extended breast feeding and a doctor who doesn't rely on antibiotics. I think we needed a more "crunchy" doctor, for lack of better terms. My mom had suggested a while ago to look into finding a holistic doctor. And after a little research, we found one. And we are very happy with her.

Size-
At her last appointment, which was her year check up, Kylar was in the less then 3% for height and weight and less than 5% for head. She is a peanut! And her doctor is not the least bit worried. She can tell Kylar is healthy, just petite! Hopefully she will stay that way.  She probably weighs about 17-18lbs now. She is just little. Nothing wrong with that!! Someone has to be the little one!! It just means she will be the one thrown up in the air if she decides she wants to be a cheerleader!
She is in a size 3 or 4 shoe. Depends on the shoe really. And clothes, she is in anything from 9 month up to 18month (usually caused by her fluffy butt).She wears cloth diapers, but when she is in disposable diapers, she is in a 3 (barely).

Food-
Kylar is still nursing 3x a day (morning, mid day, and before bed). She also eats 3 meals a day, plus a snack. And she usually has 2 sippy cups of milk and water through out the day! She is a piggy!! She eats pretty much anything. She loves fruit, pasta, goldfish, hotdogs, oatmeal and anything as long as you put ketchup, bbq sauce or pasta sauce on it. Her favorite might be Pizza Fridays though! She will eat anything on pizza!

Sleep-
Little girl likes her sleep!! She sleeps from 9:30-9:30. And naps from 1:30-3. Like clockwork. But, she is flexible if I ask her nicely to be! If we are out, she will usually be okay til about 2-2:30ish. Then she gets crabby. Our nap routine is she nurses, gets a story and rocks, then she goes in her crib and either goes right to bed or plays then falls asleep. After nap, she is super crabby and needs to hold on to pink bear and snuggle on the couch for a bit. I wonder where she gets that from???
Night time routine is just as simple. She gets a bath, lotion, and vitamins. Then she nurses, gets her teeth brushed and gets a story. Then her Daddy and her rock and say a prayer. Then we both give her kisses and lay her down. Lately she has been listening to the prettiest lullaby c.d. by Jewel (Thanks Grammie and Bumpy)!

Milestones-
Kylar started walking at the beginning of the month. And then all of a sudden she walks like a pro!! No need for assistance or anything!! Not even arms our to keep her balance!! She is started to attempt to run! Silly girl.
She recognizes most of her toys by name, even brand new toys. And she says yeah, mama, dada, cat, lola, up and hi. She waves hi and bye. Blows kisses. Nods yes and no and understands what they mean. She can sign milk, more, all done, please and just recently learned thank you.

Activities-
Kylar is still in gym class and goes to story time. Both are on winter break right now though, but will start up again next week. We are also going to take Mommy and Me yoga class with Benjamin and his Mommy!
She loves to play with dolls and already has a love for the Disney Princesses!! She is starting to get into her crafty side, like her Mommy!! She colors with markers and will try crayons soon too. One of her favorite things to play with right now are her magnets! Santa brought her some magnets and she loves to take them on and off the fridge!

And for your viewing pleasure! 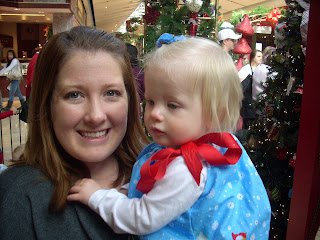 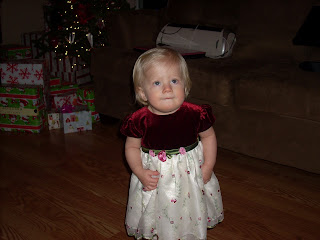 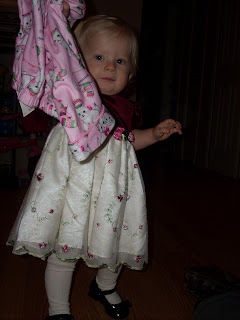 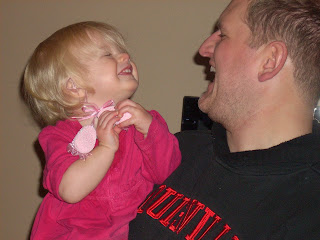 A star upon our tree

In September, Randy and I have been talking about expanding our little family. We had decided, there was no time like the present.  And much to our surprise, our trying to conceive journey was a lot shorter than expected. We found out we were pregnant the end of October. This was supposed to be a happy and exciting time. Filled with telling Kylar what it would be like to be a big sister. Telling our families and friends. Preparing for the arrival of a new little one.

Our excitement was cut short just a few weeks into the pregnancy. On Friday, Nov 5th, I miscarried what would have been are second child. I went in for regular blood work and my doctor called with the results. I could tell by the tone of her voice it was not good. My HCG level was not doubling like it should. She felt the pregnancy would not last. She wanted to re-test that following week to double check, but said it didn't look good.  That next morning is when we lost the baby.


We have gone through a lot of emotions the past few days. We were mad, sad, confused, hurt. You name it. We do not understand why we got pregnant just to have that little baby taken away from us. Why was this happening? What did we do? What could I have done to prevent it? And since the baby was not "technically" a baby, would would happen? Would the baby go to heaven? When we go there, will we know the baby? Will the baby know us? Or is the baby just gone?

After a lot of heart breaking conversations, we have come to a bit of a peace about it.  I know in my heart this little baby would have been a boy. I just had a feeling. We believe that he was taken from us because he was either going to have something wrong and would suffer or b/c God has greater plans for him. We know that he is in a place where he will not suffer or feel any pain.  We know that is he taken care of. And we believe that he is in heaven. And that we will one day meet our little boy. We also know that Kylar will always have her little brother watching over her.  Our little angel baby is going something greater than he could have done here on Earth. And knowing that, we were able to come to peace with the loss of our baby.

While, we want to grieve and continue on, we also do not to forget our baby that was taken too soon. We will tell Kylar and any future children we have about their brother in heaven. And we will let them know that he is always there watching over us. We decided that to honor our lost family member, we are going to get an ornament for our Christmas tree. Randy said we should get blue since I feel he was a boy. He also suggested something simple, like a star. So we will be looking for a blue star ornament to remember our baby. He will forever be a star upon our tree.
Posted by Mallorey at 11/08/2010 11:24:00 PM 1 comment: Links to this post

A year in the making!!

I cannot believe our little chinchilla is a whole year old!! She is such a sweet little girl!!

We celebrated her birthday with a party in Chicago and a party in Louisville. And on her actual birthday, just the 3 of us spent the day together!

We decided to go up to Hubers. We left pretty early to head up there. Kylar loved it!! There were little goats roaming around!! She loved them. She laughed hysterically whenever they came by her.

Then we went on a wagon ride around the farm, played on the swing set and rode a little tractor. We ended up having lunch at the restaurant they have up there. It was so good!! We had ham, fried chicken, green beans, corn, mashed potatoes, chicken and dumblings and rolls with apple butter! It was so good! Kylar even ate her fair share!!

Before we headed out we picked out a pumpkin to carve later that night. Then made the drive back home. And Kylar fell asleep in the car (Thank goodness, b/c she missed her morning nap).

We opened presents and Kylar played and I made dinner. One of Kylar's favorite things to eat is pancakes! She loves them! So we had pancakes and bananas for dinner! She was in 1 year old food heaven!

After dinner we carved the pumpkin then continued on with our regular nightly routine! It was a great day! A perfect way to celebrate the first year of Kylar's life!!! All night long I kept telling Randy how much fun I had and thanking him for such a great day! It was amazing!

Pictures from all her birthday festivities are on shutterfly.
Posted by Mallorey at 11/03/2010 05:30:00 PM No comments: Links to this post 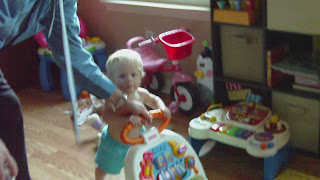 Baby girl is getting big. She walks around the house with her push toys! She will not walk by herself yet. But when she uses those toys, boy she sure knows what she is doing!! She can fly through the house!! Crazy girl!!

Here is what is going on in her world:
She eats 3 meals a day, 1 snack and nurses 4-6times a day. Depends on her mood!
She loves stories and book!
She likes art projects.
Every animal is Lola! Wowa! Wowa!!
Loves to give kissers.
Takes either two 30 minute naps or 1 hr long nap.
She is soooo close to walking.
She loves to play peek-a-boo and "I'm gonna get you!" but instead of running away, she crawls towards me laughing.
She has 5 teeth!! And 1 about to poke through!

She is just a bundle of energy and joy! She gets so excited and scurries to the door as soon as she hears her Daddy pull in the drive way.

As much as it makes me sad to see her grow up, I cannot wait to see what the next stage in her life brings. 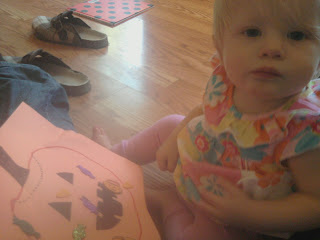